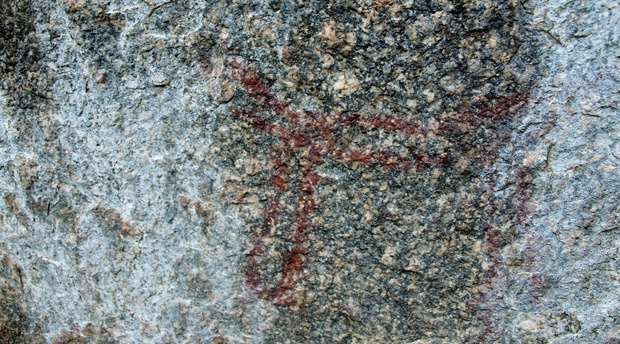 If you are prepared to look a little deeper, Mutinondo offers an abundance of archaeological clues to the area's heritage; from tiny microliths (simple stone tools) around lodge rock, to pottery fragments and the ruins of centuries-old ironworks, to stone-age artwork from the earliest known Zambians, the baTwa people.

Although Mutinondo's full history is incompletely known, there are pieces and signs close to the surface that can be easily seen. Probably the most notable of these are a series of Nachikufun artworks, left by members of the nomadic baTwa people, who used the area thousands of years ago. The artwork is not only puzzling in itself - composed of symbols repeated in multiple locations across the wider region, but with any meaning they might have had lost to history - but its age is also, at present, unknowable: the pigments used appear to lack any carbon content, which makes radiological dating of the paintings difficult.

Although several of Mutinondo's inselbergs bear paintings from this period, the best preserved examples within the wilderness area are at Hyrax Hill, which is about 4.6 km from the main lodge. Outside of the wilderness area, the Nachikufu cave site 53 km away, first excavated in 1950, houses more extensive paintings and relics from the same period, and even gives its name to these types of paintings.

Please note that the prominently visible, acrylic-paint artworks on Quentin's Rock are in no way ancient: they are the handiwork of acclaimed Zambian Artist Quentin Allen, after whom the rock was named.

At Hyrax hill and elsewhere, fragments of pottery can also be found, but these are much more recent, usually attributed to a period of conflict in the region when the native Bisa people stockpiled food from the rocks, and hid from invaders from other tribes.

At various sites around the lodge, guests may also find microliths - tiny, shaped pieces of rock, often quartz, which were used as tools by ancient humans. Although the provenance of Mutinondo's microliths is not entirely known, these are among the most basic and earliest stone tools left behind by many ancient peoples.

More uncertainty hangs over the ironworks located at Nyandela Dambo, close to our western boundary, where remains of an iron-age kiln and fragments of molten iron can be picked out by the keen-eyed observer. The works were almost certainly built and maintained by people of the Bisa tribe (the modern-day inhabitants of the region), and are thought to have gone cold for the last time between 200 and 100 years ago, presumably as part of a wider trend of rural abandonment.

A Brief History of the Bisa People

The local population belong to the Plateau Bisa tribe, the mushroom clan renowned for hunting. Their historical lifestyle is well described in the book 'Large Mammals and a Brave People - subsistence hunters in Zambia' by Dr. Stuart Marks, which is available from Amazon.

Like many ethnic groups inhabiting modern-day Zambia, the Bisa people have their origins in the former Lunda-Luba Empire, situated in south-central Congo. Bisa tradition is that it was from this empire, called "Kola" and ruled by Mwata Yamfu, that their ancestors came, and that disputes arising from land scarcity led to their emigration. According to F.M. Thomas' 'Historical Notes on the Bisa Tribe' (1958), the emigration of the Bisa from Kola occurred around the year 1650, but it was not until the early eighteenth century that the Bisa emerged as a distinct ethnic unit.

According to the traditions of the Valley Bisa (the Bisa who settled the Luangwa Valley), the emigrating groups of their own ancestors and those of the Bemba (a sister tribe) remained together until they crossed the Chambezi River. It was here, while the group paused before crossing, that the Bemba built a fish trap and caught a crocodile. When the Bisa found a ford and crossed, the Bemba remained to investigate and consume the crocodile... thus, among the Bisa, the "Ngona" (mushroom) became the clan of Bisa chiefs, and the "Ngandu" (crocodile) became the dominant clan among their sister group, the Bemba.

(Note: The belief amongst our Bisa employees is that there was great hunger at the Chambezi River and the two clans separated over a dispute because a woman hid a mushroom from another woman so she had food for her baby. Hence the "Bowa" clan - which is the local name for mushrooms)

From the Chambezi, the Bisa traveled to the plateau, said to be near Mainza Hill (note similarity to Mayense, our largest inselberg/granite dome), close to the headwaters of the Mutinondo and Mupamadzi rivers and settled there. Old village sites can be found around the Mutinondo Wilderness area, along with evidence of old fortifications where the Bisa hid from invading tribes, visible along the Mafoni Road, an old road to the escarpment.

Apparently the Bisa began to move away from the Mutinondo Area about 100 years ago, because of the attractions offered by the new road, and during a village regrouping scheme by the first Zambian President. The local economy is still very dependent on hunting/poaching of the diminishing wildlife, and Mutinondo Wilderness is involved in trying to assist the Community to diversify.